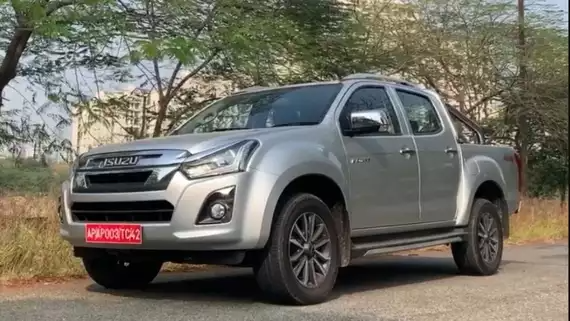 Isuzu D-Max V-Cross has evolved, if not bigger but better, as the pick-up steps into the 2019 edition. To begin with, the D-Max V-Cross now gets an exclusive engine with automatic transmission, a few visual changes inside out, a fatter price tag and a new name: Z Prestige. Read the full review.

NEW DELHI: Live life king size. People who believe in the adage and actually follow it would like what I’m driving today. Essentially meant to be an SUV, the manufacturers had some other plans. Sophisticated, not the correct word here, but the Isuzu D-Max V-Cross is built with an intent to serve a utilitarian purpose. However, I feel in India due to a lack of rivals, V-Cross has created a lifestyle niche for itself.

Well, the particular Isuzu isn’t a new name out there, so why are we discussing so much. D-Max V-Cross has evolved, if not bigger but better, as the pick-up steps into the 2019 edition. To begin with, the D-Max V-Cross now gets an exclusive engine with automatic transmission, a few visual changes inside out, a fatter price tag and a new name: Z Prestige. Time for light, camera, action, and reaction:

Look and feel:
See it to believe it, how humongous the V-Cross is in flesh. Out on the streets, I used to envy the people behind the wheel of an Isuzu. Well, I’m on the other side of the table today. Almost a 50-50 configuration of front-end SUV and rear-half truck, the D-Max V-Cross features a list of changes across the bodywork. That chrome-laden front grille grins at you sheepishly, with reworked fog lamp unit and headlamp cluster.

Take a step back, look at the side profile. The V-Cross runs longer than Range Rover Velar or BMW 7 Series. While you admire Isuzu’s generosity in terms of extravagant dimensions, I would quickly take you through the latest inclusion. While those muscular bars are plonked between the cargo and the body, the vehicle gets a new side step, shark-fin antenna and a new pair of shoes. The 18-inches surely seem appropriate, however, the gap between the tyres and wheel arches are (striking) to the eyes.

I wish my bed was as big as the cargo, in a light vein though. The 235-kilo storage is carpeted with black plastic material. The tailgate is bulky like most other parts. Too many stickers and badges stamped on the rear make it visually engaging and slightly cluttered. Not much to grumble, the design language is mostly retained from the previous generation and is in line with how Isuzu constructs its heavy-duty vehicles.

Before you thumb the starter, let’s have a fish-eye view of the cabin. The dual-tone interior is replaced with an all-black finish. Few engineering changes have been offered inside, like the brown leatherette seats, split glove box, silver inserts and soft-touch material used at several places. It is not as spacious as it appears from outside, comfortably accommodating four adults.

The driver’s seat is electrically adjustable with the luxury of the height-adjustable steering wheel. The rear seats offer a very upright posture with limited under-thigh support, (presumably) due to loading space at the rear. The instrument cluster is extremely dated and misses out on Android Auto and Apple CarPlay. No sunroof, AC vent for second-row or scratchy plastic, if you start knit-picking the list is endless. However, you may get a flock of feature-loaded SUVs at a price Z Prestige begs for, not one would be as purposely as the Isuzu.

Let’s take a spin:
Foot on the brake, no clutch pedal, thumb the ignition and allow yourself to witness an immersive experience. Why do I say that? The all-new 1.9-litre diesel engine is mated to a 6-speed automatic torque converter. Power rated at 150hp and 350Nm, the BSIV engine takes a leap of 16hp and 30Nm.

Power hike and engine downsize look handsome on the spec-sheet, however, they are not really contributing much to an enhanced driving experience. I do concede short-spaced gear ratios of regular 2.5-litre diesel unit was foot-soaring after a point in time. Now, this automatic gearbox is butter smooth and eases the life in the city.

Overcoming the initial turbo lag, the engine has a strong mid-range, operating seamlessly in 2,000-3,500 rpm. V-Cross will cruise at triple digits all-day long without much huff and puff. Cabin insulation is an improved area now, however, the NVH levels cause quite an interruption in conversation, when the car is pushed hard towards the redline.

To sum it up, the mile-munching pick-up houses an extremely refined motor, alongside offering a fairly bumpy ride. Expect the ride to get better when you load the boot to the lip, as the car seems to settle down a bit. During our test run, Z Prestige edition delivered 11 kmpl in the cities and 13.5 kmpl on the highways.

Respectable performance aside, V-cross mirrors a decent amount of body roll in bends. Add to that, filtering it through crowded confines is a task cut out. While V-cross features a more comprehensive list of safety standards including hill assist and start-control, traction control and a reverse camera, I was really looking forward to parking sensors – something essential to keep the humorous outfit at a distance from others.

Who is going to buy it?
You may consider two ways of looking at the ex-showroom price of Rs 19.99 lakh. It’s clearly not the most affordable offering. On the other hand, what’s not so apparent, unless you take a test ride, is the superb power train, eased-out drive experience, and priceless delight of owning a mammoth Isuzu. While buying it or not is solely your choice, Isuzu currently provides something no else does. Enjoy exclusivity!

Kumkum Saini is an auto Enthusiast with over 3 years of industry experience and is presently the Editor of CarCostSaving.com. She loves super sport motorcycles and rear-wheel drive cars. Any machine that can go sideways is always on top of the list for him.
NEWER POSTMahindra XUV300 review: New avatar in second innings
OLDER POSTHyundai Aura review: Your next compact sedan?