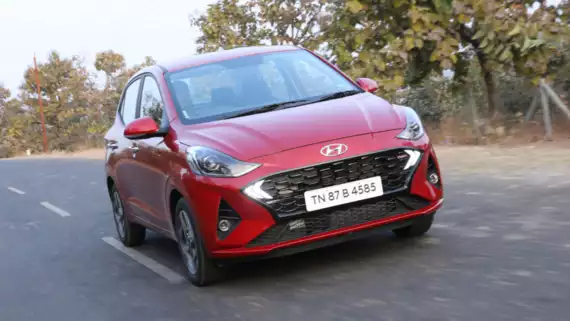 There is an uncanny similarity between the car we are driving and the city. While Indore ranks as the cleanest city in the country, a leading carmaker Hyundai walks in with one of the cleanest diesel engines for its brand new compact sedan - Aura. Clean and cars are an oxymoron, however, dig a bit deeper and witness the first-of-its-kind 1.2-litre BSVI-compliant diesel engine.

Hyundai Aura review: INDORE: There is an uncanny similarity between the car we are driving and the city. While Indore ranks as the cleanest city in the country, a leading carmaker Hyundai walks in with one of the cleanest diesel engines for its brand-new compact sedan – Aura. Clean cars are an oxymoron, however, dig a bit deeper and witness the first-of-its-kind 1.2-litre BSVI-compliant diesel engine.

Just not an exclusive engine, Aura lands a feature-loaded punch in the compact sedan segment. Importantly, Aura will coexist with the Xcent, aimed at youth and millennials. Does it punch above its weight? To find out let me tell you about our rendezvous:

The side profile is a sight to behold. A slightly hunkered-down built sits of striking R15 alloys (lower variants gets R14 without diamond-cut finish), chrome on door handles, shark-fin antenna and black window line. If that’s ordinary for a compact sedan, step forward to notice the details. The expressive wheel arches and lines on the bonnet and side profile lift the aesthetics. Hyundai in an attempt to offer a coupe-ish look has offered a beefy C-pillar, which just fits into the scheme of things.

Venue, Grand i10 Nios, Elantra … and now the Aura have a thing or two in common, which is actually not a bad connect. The AURA badging on the tailgate, ‘Z’-shaped tail lights, a chrome strip between the lamps and a body-colour bumper do tick the right boxes when it comes to styling. You know what, the booty may seem overworked a little, but I like my date.

And if you’re going for the Turbo trim, the blacked-out grille with a noticeable ‘turbo’ badging ups the statement by a few notches. Our partner today is the range-topper with all the bells and whistles. The lower variants miss out on a few pointers.

And things get cozy:

I mean quite literally. On most days after long office hours, the grey-themed interior will feel soothing. Tuck yourself in the driver’s seat, and allow yourself to immerse into a list of creature comforts. In Turbo’s case, however, the configuration appears a bit different. The black fabric stitched in red does reveal a sense of aggression.

At your disposal is the segment-first 8-inch infotainment display with Nav, android auto and Apple CarPlay, and importantly with fairly good tactile response. Well, the screen also acts as a reverse camera monitor.

On minibreaks, if you’re planning to spend some time with your friends and the Aura, the cheerful layout shall make the mood upbeat. While the Arkamys sound system, wireless charging facility, two USB outlets, dual cup holders, power windows and cooled glovebox are extremely handy, the bronze inserts, keyless ignition, honeycomb detailing on the front cluster and door panels reflect a touch of modernity (without Hyundai BlueLink).

The generously built cabin and second-row offer ample space for four grown-ups. The headroom, back and thigh support in most cases will be adequate. If the front row passengers have gala time over the comfort features, second-row people shouldn’t feel left out. Dedicated rear AC vents, socket charger, adjustable headrest, armrest with twin cup holders offer too little to knit pick. Sling your bags into the 400-odd litre boot and set out for weekenders.

Hyundai gets you the Aura in multiple engine options coupled with both manual and AMT transmission. And yes, all of them are ‘BSVI-compliant’ – the new buzz word in the Motown.

The 1.2-litre, naturally-aspirated, four-pod, petrolhead is borrowed from the Grand i10 Nios, which puts out 83 horses and 114Nm. The petrol engine offers an ample amount of refinement with the Aura performing optimally between 1,800-3,500 rpm.

The more energetic and livelier 1.0-litre Turbo-pet motor here is a slightly under tuned version of Venue, generating whopping 100 hp and 172 Nm, however, it only gets the 5-way manual stick. The torque delivery is well spread out, with the grunt kicking in as early as 1,000 rpm and is available over the tacho dial till 3,700-4,000 rpm.

Both 1.2-litre Kappa petrol and 1.2-litre diesel offer a fair amount of tractability. And rowing throwing the gears is equally effortless, thanks to a butter-smooth manual transmission. However, adhere to a slight caution and lightfoot in the beginning or you would end up stalling the car.

Gun the Aura down a straight, the digits on the speedo climb uninhibited. Especially with the powerful Turbo, the sedan talks to the winds at 170 kmph. The light steering gains composure with the peaking speed, however, the response isn’t the sportiest. That said, I wonder how many of you with your family or friends would chase triple-digit speeds. On the other hand, the directional changes at low speed are decent.

Most buyers based in cities would like the AMT to counter the daily exhaustion of pedaling through traffic labyrinth. The linear power delivery with a smooth pull comes with no surprises, making it apt for city runabouts. After all the talks on the performance front, run your eyes through the real deal for your day-in and day-out purposes:

Aura glides over undulations, ironing out bumpers and potholes at high speed. On the flip side, the moderately-stiff suspension can be a tad intrusive at low speeds, unsettling your posture. The cabin insulation is upmarket, with minimal noise creeping inside.

Made my day. Stay a little longer:

Well, surely it will. Hyundai’s variable warranty option gets your back (I mean your Aura’s) shielded for as long as five years.
3 years/ 1 lakh kilometers
4 years/ 50,000 kilometers
5 years/ 40,000 kilometers

All the five variants come equipped with dual airbags, Isofix mounts, ABS with EBD, high-speed beeper and rear parking sensors as standard. Move up the ladder to enjoy the privileges of rear camera and emergency stop alert.

While the underpinnings are shared with the Grand i10 Nios, usage of 65% high tensile strength steel makes the built light and equally robust.

When are we meeting again?

While Turbo offers a sense of thrill, the petrol AMT will find takers, who are looking for a compact sedan for personal use. However, Hyundai betting on Ecotorq diesel can be the game-changer in the segment, especially after market leaders Maruti Suzuki and Tata Motors bowing out with Dzire and Tigor respectively.

Kumkum Saini is an auto Enthusiast with over 3 years of industry experience and is presently the Editor of CarCostSaving.com. She loves super sport motorcycles and rear-wheel drive cars. Any machine that can go sideways is always on top of the list for him.
NEWER POSTIsuzu D-Max V-Cross Z-Prestige review: Is bigger always better?
OLDER POSTHyundai Grand i10 Nios review: The reliable hatch gets a worthy upgrade

2022 MG ZS EV facelift Review: Fastest SUV in its segment but cheapest to run as well!