The Artura is McLaren’s first volume-production hybrid, but it’s not the first time that this type of technology has been integrated into its road cars.

LAS VEGAS, Nevada – Emissions and fuel economy traditionally aren’t design priorities for mid-engine sports cars with near-quarter-million-dollar price tags. But as global mandates continue to raise the bar for automakers across the industry, the times are a-changing, and McLaren Arura 2023 is eager to prove that performance and efficiency can co-exist in a thoroughly compelling sports car.

The Artura is McLaren’s first volume-production hybrid, but it’s not the first time that this type of technology has been integrated into its road cars. A decade ago the company debuted the limited production P1 hypercar, which, with the help of a radial flux motor, generated a stunning 903 horsepower. Engineers took that approach even further with the Speedtail in 2018.

Thanks to the steady march of technology, McLaren says that the Artura’s ‘E-Motor’ system is roughly 33% more power-dense than the P1’s hybrid system while weighing half as much. And at a base price of $237,500 with destination fees, the Artura also exists in a market segment that isn’t exclusive to princes and oligarchs. 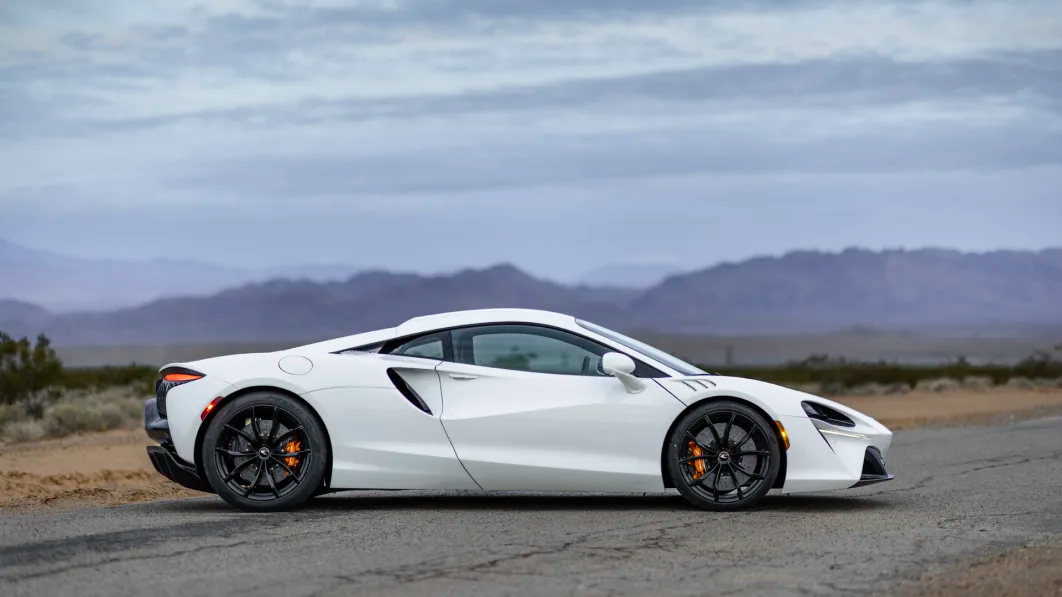 But don’t call it “entry level”: McLaren says it’s through with the Sports Series / Super Series / Ultimate Series nomenclature. Instead, the Artura sits alongside the 720S in the automaker’s Supercar category, while the softer GT now serves as the starting point for the brand. Seven-figure hypercars like the Speedtail will represent the company’s flagship offerings.

Marketing speak aside, this differentiation indicates that McLaren has big expectations for the Artura. And considering how much new componentry underpins this car – the carbon fiber monocoque chassis, engine, hybrid system, eight-speed dual-clutch transmission with McLaren’s first integrated electronically-controlled rear differential, multi-link rear suspension design, in-car technology, and other core elements are all the result of clean-sheet designs – it’s reasonable to expect that we’ll be seeing a lot more of this hardware in future McLaren models. But rest easy, purists. This thing doesn’t disappoint. 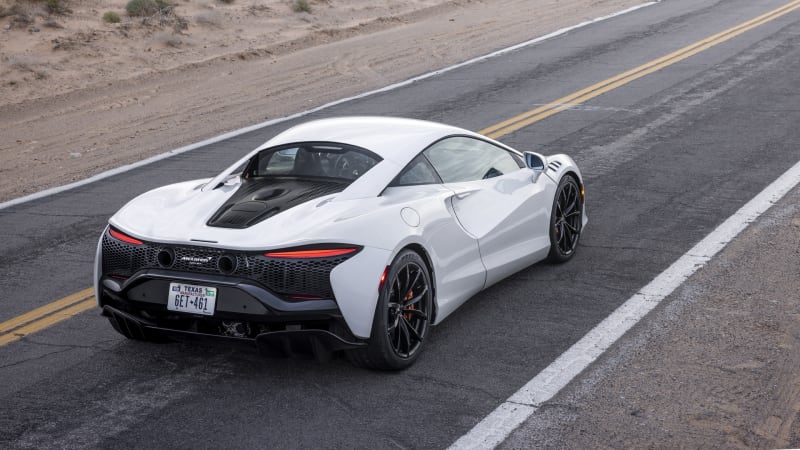 While the superformed aluminum and carbon fiber bodywork takes some inspiration from the 570S and 720S that came before it, once settled in at the helm, it’s clear that this isn’t just more of the same. Improving everyday usability was a big priority in the Artura’s overall design, and that’s evident just by looking at the control scheme. McLaren has completely revamped its formerly ponderous layout for vehicle settings, placing rocker switches for the powertrain modes and suspension settings on the gauge cluster housing to make those functions accessible without taking your hands off of the steering wheel or your eyes off of the road. The available nose lift system now gets its own easy-to-reach toggle button on the lower dash, too – an upgrade that might initially seem trivial, but can make a big impact on everyday drivability in a car that sits this low to the ground. 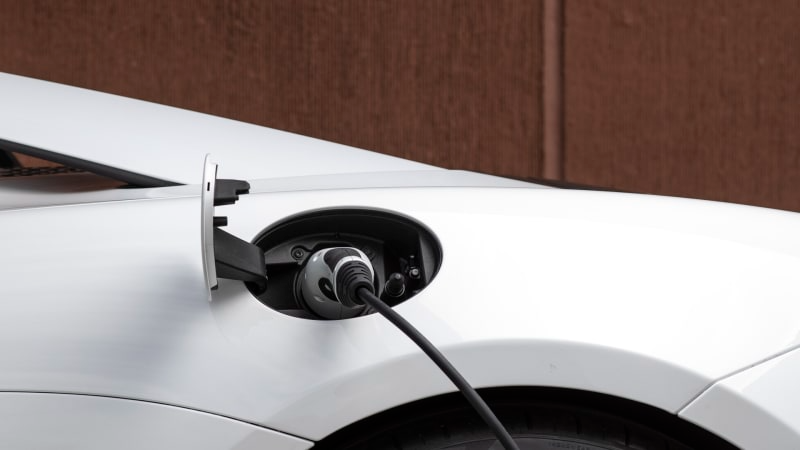 While the V6’s soundtrack isn’t overtly exotic, it’s a pleasantly distinctive, mechanical racket that’s arguably more characterful than the noise made by the boosted V8s that McLaren has used in its modern road cars, and the instantaneous torque provided by the hybrid system does a commendable job of smoothing out the power delivery at lower RPM. Running at full steam, the Artura’s acceleration feels more urgent than the Maserati MC20’s, yet not quite as explosively quick as the all-wheel drive Porsche 911 Turbo S. 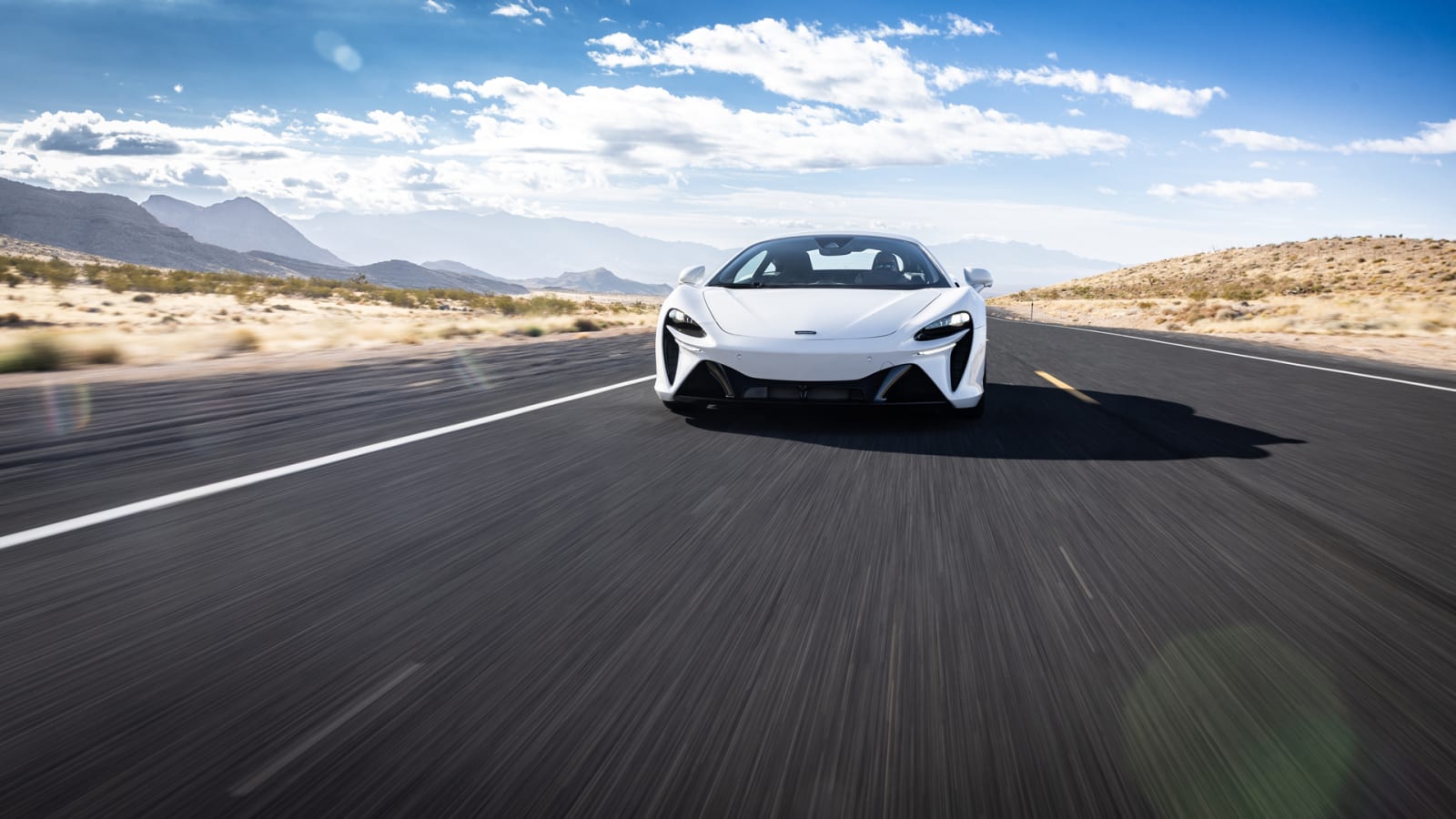 But out in the Mojave Desert, it’s the handling that ultimately impresses the most. Despite the hybrid system’s additional poundage, the Artura weighs in at just over 3,300 lbs, which makes it lighter than the Maserati and 911 Turbo S (as well as the Ferrari 296 GTB) by several hundred pounds. Turn-in is sharp and precise thanks in part to the Artura’s svelte physique as well as the optional, track-focused Pirelli P Zero Corsa tires that the test cars wore. As with other modern McLarens, the brake pedal is admirably firm when called upon to scrub off speed, and that makes it easy to hustle the car with confidence. Crucially, McLaren has figured out how to deliver that without causing over-eager brake response during everyday driving, which is a common issue in high-performance road cars that are outfitted with big carbon-ceramic stoppers. 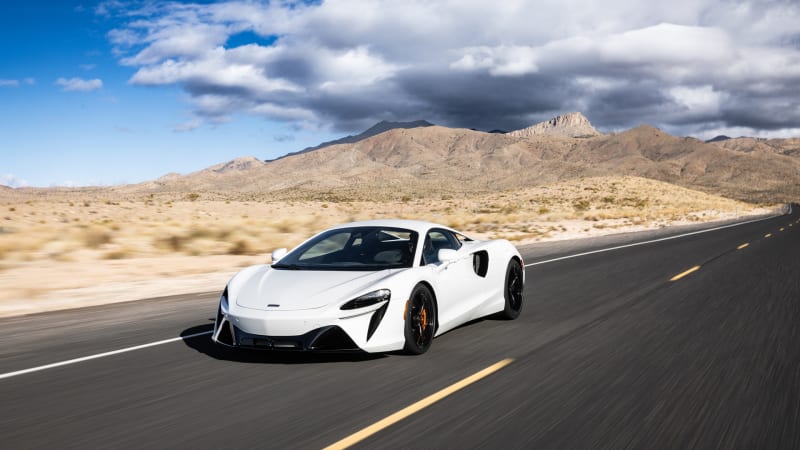 The ride quality offered by the Artura’s conventional adaptive suspension setup isn’t as impressive as the trick hydraulic system that McLaren uses on models like the 720S and 765LT, but in its softest suspension setting, the Artura feels compliant enough for extended stints at the wheel. And as I discovered while flinging the Artura around the infield road course at Las Vegas Motor Speedway later in the day, the Track suspension setting will dutifully keep body motions in check when the going gets fast.

To help owners pull off heroic drifts while reducing the potential for impromptu meetings with tire walls, McLaren has also outfitted the Artura with a Variable Drift Control system. First seen in the 720S, VDC allows the driver to step the back end out, bury the throttle, and dial in some opposite lock while letting the computer sort out the right amount of power needed to keep the car at the intended attitude.I fired the system up during my last lapping session with the car, but with the considerable grip of those 295 mm-wide track tires working diligently at the rear to put the power down and keep me on the straight and narrow, it took a lot of deliberate effort to loosen the Artura up on a tight course like this one. If tire-shredding oversteer is high on your priority list, you might want to stick with the standard P Zero summer tire.

Of course, like with my time in the Valley of Fire, that wouldn’t be the most efficient way to drive the Artura. But it sure would be a hell of a lot of fun.

Kumkum Saini is an auto Enthusiast with over 3 years of industry experience and is presently the Editor of CarCostSaving.com. She loves super sport motorcycles and rear-wheel drive cars. Any machine that can go sideways is always on top of the list for him.
NEWER POSTCost of Volkswagen car in India- Price Specifications, Reviews
OLDER POSTThe Most Epic BMW M Road Car is in India

The Most Epic BMW M Road Car is in India